I dedicate these lines to Pau Casals without any pretension or justification other than that they might be of some interest to some reader somewhere.

Casals is a contemporary “living” Catalan about whom much has been written and, generally speaking, these accounts are fairly evenly balanced. Thousands of concerts across Europe, Russia and the Americas have generated an astounding collection of comments, glossaries, criticisms, speeches and articles about el maestro, many of exceptional quality, especially those published by the British, German and Central European press. Casals kept an updated perfectly organised record of these publications for many years. I would like to think he still does, hoping it withstands the upheavals many households are forced to endure. So many things are lost! The great tragedy of these upheavals in countries where they are endemic is the total loss of anything that was organised, and the lack of any inclination to offer any sort of recompense. If any projects are created they tend to be left unfinished, leading to the most absolute and irreparable loss. Such upheavals have voided our homes and left our society without any fondness for reminiscing, for our history or the past.

The position gained by Casals in the music world has brought him great international acclaim. His reputation has neither been eclipsed nor has it waned over the years. His legacy shall surely be astounding, and legendary! No one in our country, whatever his or her walk of life, has excelled as far as Casals over the past few centuries. The bibliography on Casals is therefore both extensive and ever-expanding.

It is not our intent here to write a descriptive account of all this published material. Joan Alavedra, for example, started writing a first-hand account of el maestro as they both had lived for a considerable length of time in Prades, in the south of France. Alavedra was an expert on great personalities of his time. He had the book perfectly visualised in his mind’s eye: he would divide it into three main sections, starting with Casals’ early days in Paris, then his triumphs in Vienna and finishing up with his days in exile in Prades. This would enable him to broach many aspects of Casals’ life, not just the world of music but also how the cellist integrated into society. Unfortunately, despite his best intentions, Alavedra’s book never came to be.

The beginning of Alavedra’s (abandoned) book was taken up by another author, Arthur Conte, who was the Mayor of Salses and Member of Parliament in the southern French region of Pyréneés-Orientales. This book is laden with enthusiasm, though perhaps is just a tad too mundane. While its vision of el maestro is befitting, most readers would swiftly move on to Tobel’s book to counterbalance Conte’s excessively flowery rhetorical style. Rudolf von Tobel book, “Pablo Casals” (Rotopfel-Verlag-Zuric), on the other hand, is a serious but somewhat impenetrable account, full of accurate details and well-founded judgements. A highly useful book for a German reader.

Lilian Littlehales also published a book titled “Pablo Casals: A Life” (W.W. Norton & Co, New York), though I admit I am unfamiliar with it. Emil Ludwig’s account of el maestro in the collection “Galerie de Portraits” (Arthème Fayard, Paris) is insightful and admirable but again full of imaginative assumptions and attributions, many invented by an author with a penchant for extravagance. According to Josep Maria Corredo (in the book described below), Casals himself felt it necessary to clarify various points.

“Conversations avec Pablo Casals” (Albin Michel, Paris) was written by Josep Maria Corredor, who was born in Girona (Spain) and is currently teaching at Lycée de Perpinyà (France). This book has been translated into various languages with considerable success. A technically perfect account, admirably executed and nuanced, with a sensitivity, precision and candour that would be hard to match. Some of the more complex questions—Casals’ thoughts on the various aspects of music or the dialectics of musical creation and performance—are expounded and debated with impeccable clarity. Both the man and the artist are brought to life in this book.

If to this collection of publications, we add all dictionary entries, essays in professional and non-professional journals, leaflets and other more abbreviated publications, the volume of excellent writing is as impressive as it is immense.

So given this scenario, one has to ask if there is anything left to say about Pau Casals today? With such an informative and invaluable wealth of material, what else could one add about the great cellist? Nothing at all, probably, as the most outstanding has already been most decidedly and conscientiously put to paper.

I would like to contend, then, that one can still attempt to write a few lines about Casals by picking up on that overlooked by others as too populist, too lowbrow. An essay, shall we say, fabricated from the leftover fallen crumbs. This is what has prompted me to do so, although I am not at all sure if it is a good idea. Perhaps not. But what else can I do? I suffer from vertigo. I was not built for heights. So I observe the world from ground level, capturing only what is within my reach. This often helps to give life to, or fill in, the empty spaces left by truly, or apparently, more elevated considerations. And with this intent, I write these lines.

Casals is now suffering a similar fate, in our country, as Josep Carner. As they have not laid eyes on him, the younger generations have rather vague notions about him. Music lovers, evidently, have not lost sight of him for an instant. But others? Casals influence goes beyond the strictly musical, he is a great dignitary. So with these lines, I aim to clarify and reinforce Casals’ unique profile, to rectify a certain oblivion due to circumstances, knowing too well that I will make no difference whatsoever.

“When Casals expounded his views he did so in a serious tone, with serene determination and an ardent desire to avoid controversy…”

Pau Casals practically only ever drinks water: he is a teetotaller. At most he might sip a glass of wine with his meals. He has never been drunk. Well, almost never! Once. One day he performed while under the influence at the Marquise de Polignac residence in Paris. The Polignac family are champagne-producers, including the well-known Pommery Greno. At one point when the American, Ms Metcalfe, was on the scene, Madame la Marquise de Polignac and Casals were very close. El maestro was probably unable to resist her persistence, gave in and got rather flustered. But one swallow does not a summer make and he still managed to play as wonderfully as ever. There are no further accounts of Casals being drunk.

He is, however, a great smoker. Always has been. He smokes a pipe and has gone through mounds of tobacco with his pipe, or his innumerable pipes. He has received countless boxes of cigars but never smoked any, despite the excellent quality of the tobacco leaves he generally receives as gifts. Pipe tobacco and the pipes themselves are a type of ritual for el maestro. He likes to mix his tobacco, measuring different blends with great accuracy to suit his taste. He is no fan of bright leaf (Virginia) tobacco preferring Belgian or Dutch blends or loose cut French tobacco –in other words, he likes plain strong dark tobacco. This ritual helps el maestro to disconnect from reality, to enter another reality, to switch off. He always has an amazing supply of tobacco, some of which he receives as gifts. He may well have qualms about charging a student 15,000 francs for a 1-hour cello class, but he would never neglect to add: “Mais il faudra bien payer le tabac du maître…” [But you will have to pay for el maestro‘s tobacco], and the tobacco inevitably appears. Tobacco supplies were very scarce in Prades during the last World War as stocks had run out so el maestro was eternally grateful to anyone who helped him get a hold of some.

Casals is no gourmet. He likes to eat and to eat well but he does not have the refined taste of Pompeu Fabra, for example. His eating is more of an act of sustenance than any appreciation of food. He, in fact, seems to be impervious to cuisines and completely oblivious to whether they are oil- or butter-based. This indifference is perhaps a natural consequent of his travels, his cosmopolitanism… 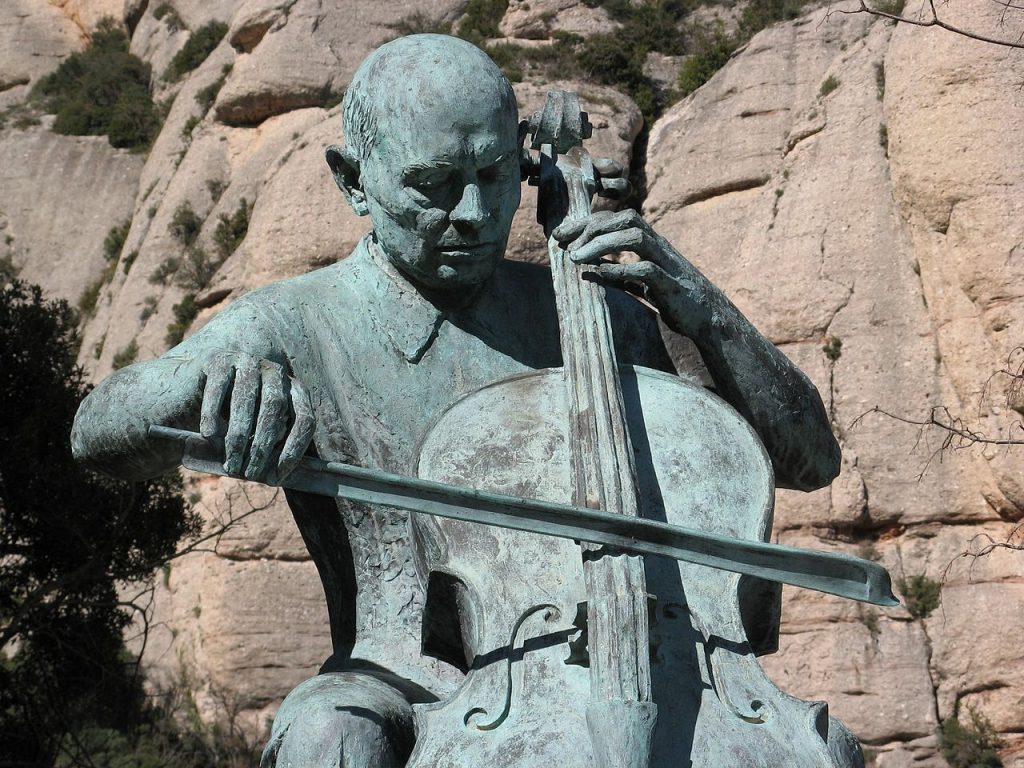